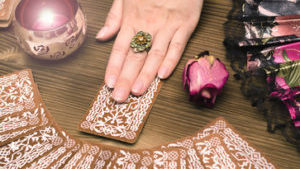 The Tarot are very special “cards” used by experienced people to read the fate or the “future”of their interlocutor.

The deck consists of 78 cards: 56 are called Minor Arcana, or “Suit Cards”; 22 are the Major Arcana, or “Triumphs”.
The Minor Arcana are divided into the four best known suits, namely Cups, Batons, Swords and Coins (Clubs, Hearts, Spades and Diamonds).

The Major Arcana instead are thematic and they represent specific figures. Each card has a precise meaning  depending on whether it appears straight or upside down.

Here are the figures of the Tarot: